A cyclodialysis cleft (CDC) is the detachment of the longitudinal ciliary muscle from the scleral spur, causing unusual communication between the anterior chamber and the suprachoroidal space, leading to eventual hypotonia. We report the case of a 63-year-old woman with normal tension glaucoma (NTG), who developed a shallow anterior chamber with relatively low intraocular pressure (IOP, 6-8 mmHg) after an ab- combined interno and phacoemulsification. His vision achieved good (20/20) with the slight myopic shift. After detecting subtle signs of clinical hypotonia, CDC was confirmed and monitored by optical coherence tomography of the anterior segment. Five months after surgery, she experienced an episode of ocular pain, with transient elevation of IOP and deepening of the anterior chamber. Spontaneous CDC closure was suspected and confirmed by gonioscopy.

To our knowledge, this is the first case describing the clinical course of spontaneous CDC closure in a patient with GTN after ab-internal trabeculotomy. It is advisable to inform the patient of the potential IOP spike after spontaneous closure once CDC is diagnosed.

A cyclodialysis cleft (CDC) is the detachment of the longitudinal ciliary muscle from the scleral spur, causing an unusual communication between the anterior chamber and the suprachoroidal space. [1]. It usually occurs after blunt trauma or anterior segment surgery, resulting in possible hypotonia. We report a case of spontaneous CDC closure in normal tension glaucoma (NTG) after ab-internal trabeculotomy. To our knowledge, this is the first case to report the clinical course of spontaneous CDC closure in a patient with GTN after ab-internal trabeculotomy.

Presentation of the case

The ab-internal trabeculotomy was performed at the nasal angle (7:00 to 10:00) using a spatula-shaped microhook (Inami & Co., Ltd, Tokyo, Japan) and the surgery was smooth intraoperatively. BCVA reached 20/20 one week postoperatively. However, the IOP was rather low (6-8 mmHg from the first to the fourth postoperative week). Ocular examination revealed a shallow anterior chamber (Grade 2 according to the Schaffer classification, no visible scleral spur) but the surgical wound was intact. There was a change in myopia but no visible fundus abnormalities. OCT showed slight thickening of the macula with no visible chorioretinal folds (Figures 2A–2B). Due to subtle signs of clinical hypotonia (macular thickening), CDC was suspected and then confirmed by anterior segment OCT (AS-OCT) from 8:00 a.m. to 9:00 a.m. (Figure 3white arrow), which had not been detected by gonioscopy due to a shallow anterior chamber.

Prior to slit closure: (A) slight thickening of the macula (B) no visible chorioretinal folds.
After slit closure: (C) reduction in macular thickening (D) change in retinal thickness from A to C.
OCT: optical coherence tomography; ILM: internal limiting membrane; BM: Bruch’s membrane. 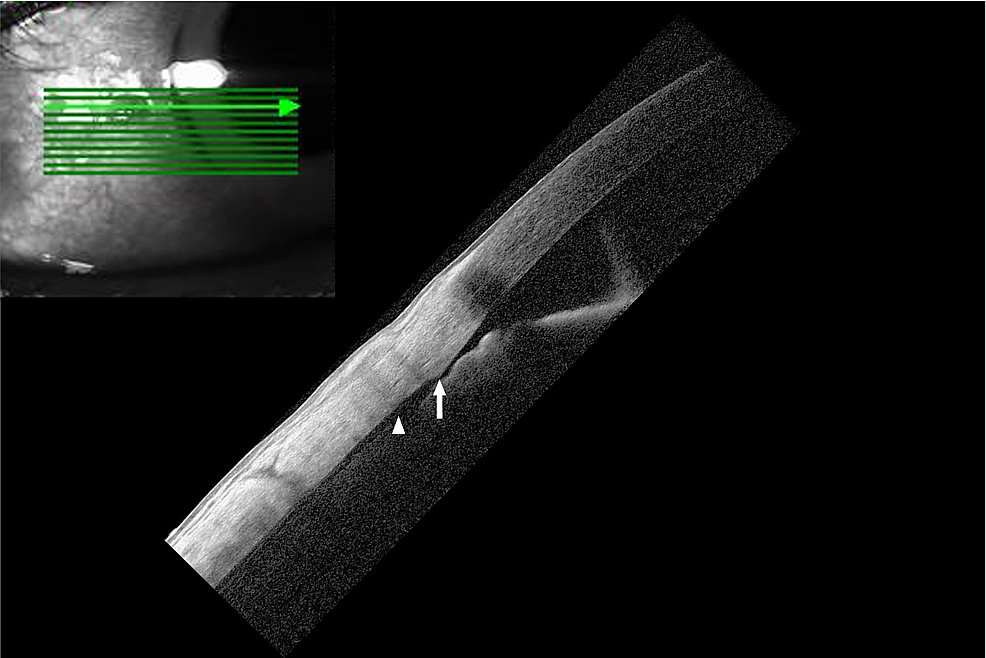 Figure
3: Optical coherence tomography of the anterior segment of the nasal angle of the left eye

To promote cleft closure, glaucoma medications were discontinued with an early reduction in postoperative steroids. Due to stable vision, the patient was managed conservatively with topical cycloplegics. However, there was no change in IOP and cleft extent on AS-OCT at 3-month follow-up. Five months after the surgery, she encountered an episode of eye pain. A rise in IOP to 42 mmHg was seen in the emergency department, which was quickly stabilized in her twenties with medication and returned to 13 mmHg (no medication) three weeks later. On subsequent visits to the clinic, she denied recent eye trauma, steroids, or over-the-counter medication use. There were no signs of eye inflammation. However, hyperopic displacement and deepening of the anterior chamber were observed. OCT showed a reduction in macular thickening (Figures 2C–2D). Spontaneous CDC closure was suspected because there was a deep anterior chamber with no apparent cleft on the AS-OCT (Figure 4A), as well as a widely opened nasal angle with no slit visible on gonioscopy (Figure 4B). 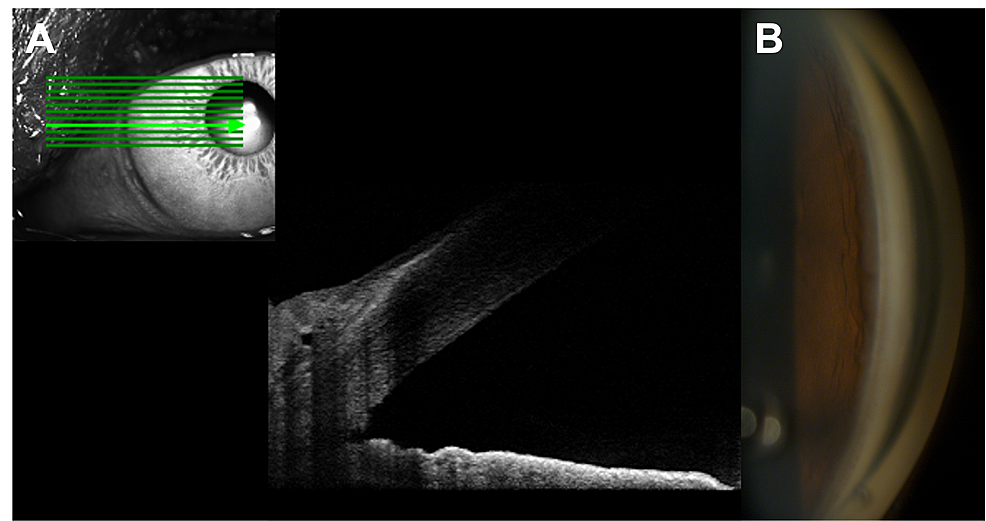 Figure
4: Closure of the cyclodialysis slot after an IOP peak

Closure of the cyclodialysis cleft was suggested by (A) AS-OCT showing no apparent cleft and (B) deep anterior chamber wide open nasal angle with no cleft visible by gonioscopy.
IOP: intraocular pressure; AS-OCT: optical coherence tomography of the anterior segment

One year after surgery, despite adolescent IOP, her visual field progressed slightly and topical medication was restarted for better IOP control.

With the growing popularity of minimally invasive glaucoma surgery, iatrogenic CDCs are becoming more common as more surgeons try to work the angle [2]. However, the diagnosis and management of CDC can be delayed due to the rarity of its occurrence and the subtlety of the clinical signs. [3]. Our case illustrates three important points regarding the diagnosis and management of iatrogenic CDC:

First, subtle signs of clinical hypotonia. Although not meeting the classic definition of hypotonia (digital or clinical), our case presented with myopic displacement with a shallow anterior chamber, suggesting anterior movement of the intraocular lens with possible ciliary body detachment. Mild thickening of the macula on OCT was another important sign of subtle ocular hypotonia (mild form of chorioretinal folds), making us suspect CDC.

Second, to increase the diagnostic sensitivity of the CDC by a new imaging modality. CDC should be diagnosed and treated early to avoid the potential impact of ocular hypotonia on vision [4]. However, visualization may be difficult in a soft eye or eyes with a shallow anterior chamber. New imaging modalities, such as AS-OCT in our case, serve as complementary tools for CDC diagnosis and follow-up [5].

Last but not least, the IOP response after spontaneous CDC closure in NTG. There is currently little evidence that CDC closure in NTG shares a similar IOP response to high voltage glaucoma. Our patient presented with an episode of ocular pain followed by an elevation in IOP, which was even higher than the preoperative IOP. After excluding other causes of elevated IOP, such as ocular trauma, steroid response, or ocular inflammation, spontaneous CDC closure was suspected due to elevated IOP with deepening of the anterior chamber. Although the mechanism remains unclear, a spike in IOP after spontaneous CDC closure has been reported [2]. It has been hypothesized that the post-closure IOP spike occurs due to the collapse of the drainage channels [6]. IOP may normalize again after re-opening of drainage channels, as in our case or previous reports [2,3,6]. We believe that the better IOP control in our patient after a pressure peak may be related to the effect of a previous ab-internal trabeculotomy, as in the previous report [2]. Although a post-closure IOP spike was observed in our case, it requires further study to determine if this can be generalized to other NTG eyes. However, it is advisable to counsel the patient about the potential spike in IOP after spontaneous closure once CDC is diagnosed, as well as the importance of regular follow-up.

CDC is rare and diagnosis may be delayed due to low suspicion and subtle clinical signs. In the absence of significant ocular hypotonia, new imaging modalities can help support the diagnosis both directly and indirectly. To our knowledge, our case is the first to describe the clinical course of spontaneous CDC closure in a patient with GTN after ab-internal trabeculotomy. It is advisable to inform the patient of the potential IOP spike after spontaneous closure once CDC is diagnosed, as well as the importance of regular follow-up.

Born with a cleft lip: the journey behind what was a broken smile